An overview of vended laundry. 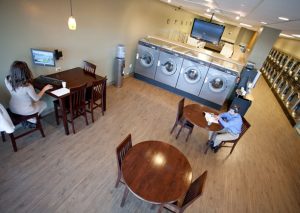 Laundromats generally occupy 1000 to 5000 square feet of retail space on long-term leases (10-25 years) and generate steady cash flow over the life of the lease. Laundromats are unique small businesses in that they have no inventory or receivables.

Laundromats range in market value from below $50,000 to $1,000,000 and most often generate gross revenues between $15,000 and $300,000 per year. Revenue is comprised of self-service use of washers and tumblers, dry-cleaning drop-off service, wash and fold drop-off service, and vended sales, which include soap, video games, pay phone, sodas and snacks. Business hours vary but typically run from 6:00 a.m. to 11:00 p.m. seven days a week and some are open 24 hours a day. New vended laundries are valued, based on actual construction and equipment costs; while existing vended laundries are valued, based primarily on revenues. Vended laundries are perfect examples of passive-income generators.

When talking about the self service laundry market customer base, generally we consider people living in rental housing or people in lower income demographics and then those who use vended laundries only occasionally when their machine breaks down or for large items. The vended laundry industry is approximately 70 years old, and is primarily composed of individual owner/operators. No significant franchises are in operation at this time.

Industry growth is based on the demographics of population density, population mix, and population income. The more concentrated the population, the greater the need for quality vended laundry facilities. National and regional demographics indicate renters, the primary users of vended laundries, are the fastest-growing segment in the nation. As of July 2017 the U.S. Census

reports about 137 million housing units with over 36% or nearly 50 million being renter occupied. This represents a continued increase in the number of renter households when compared to the near 34 million taken from the 1990 U.S. Census, about 36 million from the 2000 census and 40 million in 2010. The number of vended laundry stores built over the past 60 years has grown steadily as the population has increased and shifted to more concentrated areas.

Because clean laundry is still a basic necessity of life, the mature Laundromat business continues to be a stable, continual income generating model with predictable results and a predictable life cycle. New self serve laundromats continue to be built to replace old and inadequate businesses and are sometimes a result of shifting neighborhood demographics where new laundromats are built to follow population shifts. Other laundries are retooled with new equipment from a few pieces to total redesigns.  Chances are if you see an old store or a closed store, someone else is thinking about a redesign or a new laundromat business. 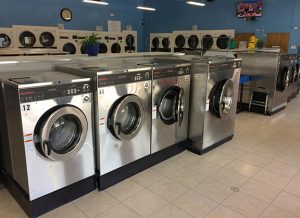 The demand for new equipment, more efficient equipment and equipment using the latest technology pushes industry manufactures to continuously improve not only the product but manufacturing capability and capacity. In fact, sometimes it seems that we simply can not build enough vended laundry equipment as lead times extend in the busier times of the year.

There are as many as 30,000 laundromat type businesses operating in the U.S. for a total of around five billion dollars in annual revenue. The demographic continues to trend toward a growing rental housing segment predicting continued prosperity. We are seeing increased vend prices, modernization of facilities and greater technology usage along with many with new ways of how to better serve segments of the market that have not typically used Laundromats therefore expanding the business model further.