The History of the Clothes Dryer 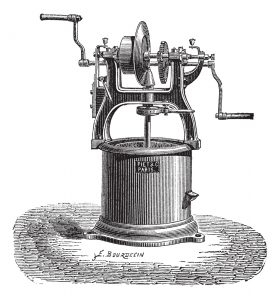 We take dryers for granted, but it wasn't too long ago that when clothes needed drying, we took them outside to hang on the clothesline. While their popularity grew in the 1950s, dryers didn't really begin coming into their own until around 1960.

Before jumping into the advancements of dryers, let's take a look at the early history of the units. If you're ready to upgrade your commercial dryer in Raleigh, NC, call the experts at T & L. You'll love our affordable pricing.

The History Of The Clothes Dryer

The first electric dryer was invented in the early 20th century. Inventor J. Ross Moore was tired of hanging his clothing outside, especially during the winter. To help keep his wardrobe out of the freezing weather, he built a shed to house his clothes while they dried. In addition, he added a stove. The clothing would hang on the line in front of the fire and dry. This was the beginning of the development of electric dryers.

For the next three decades, Moore worked to eventually build a gas and electric unit, but couldn’t find anyone to help him get his idea manufactured. The drum-type model was built and eventually picked up by Hamilton Manufacturing in Wisconsin. The new dryers were sold under the name June Day beginning in 1938.

In England and France during the end of the 18th century, clothes dryers were being made. Called ventilators, these large contraptions were made of metal. The drum had ventilation holes in it that allowed heat into it while it was hand cranked over an open fire. This invention was used for decades.

As time moved on, America caught onto the idea of these ventilators. Unfortunately, the clothing consistently smelled of smoke, was covered in soot and occasionally caught on fire during the drying process. As you can imagine, this wasn’t an ideal situation.

George T. Sampson of Ohio decided that the ventilator invention needed to be tweaked. Instead of using heat from an open fire, he chose to place a rack over a stove. This heat source was much better, as it didn’t dirty the clothing or catch it on fire! On June 7, 1892, Sampson was granted a patent for his idea. These “dryers” were used well into the 19th century.

For more information about the history of the dryer, be sure to visit back with us soon. We will talk about the advancement of these machines and more.

T & L has been in operation for 40 years. Within that time, we've worked hard to offer the best machines for the best prices. We believe in our products and are excited to share them with you. The benefits you’ll gain from trusting our washers and dryers are incomparable.  Our products offer the following advantages:

Searching for an Affordable Industrial Washer and Commercial Dryer in Raleigh, NC?

Are you ready to update your laundry facilities with new equipment? Let us help with your plans so that you can choose the right commercial washers and dryers for your business’ needs. We serve industries such as healthcare, hospitality, correctional facilities, fire departments, fitness centers, hair salons and food service as well as laundromat owners. Call us at T & L Laundry Equipment today to buy an industrial washer or commercial dryer in Raleigh, NC, that you can depend on.